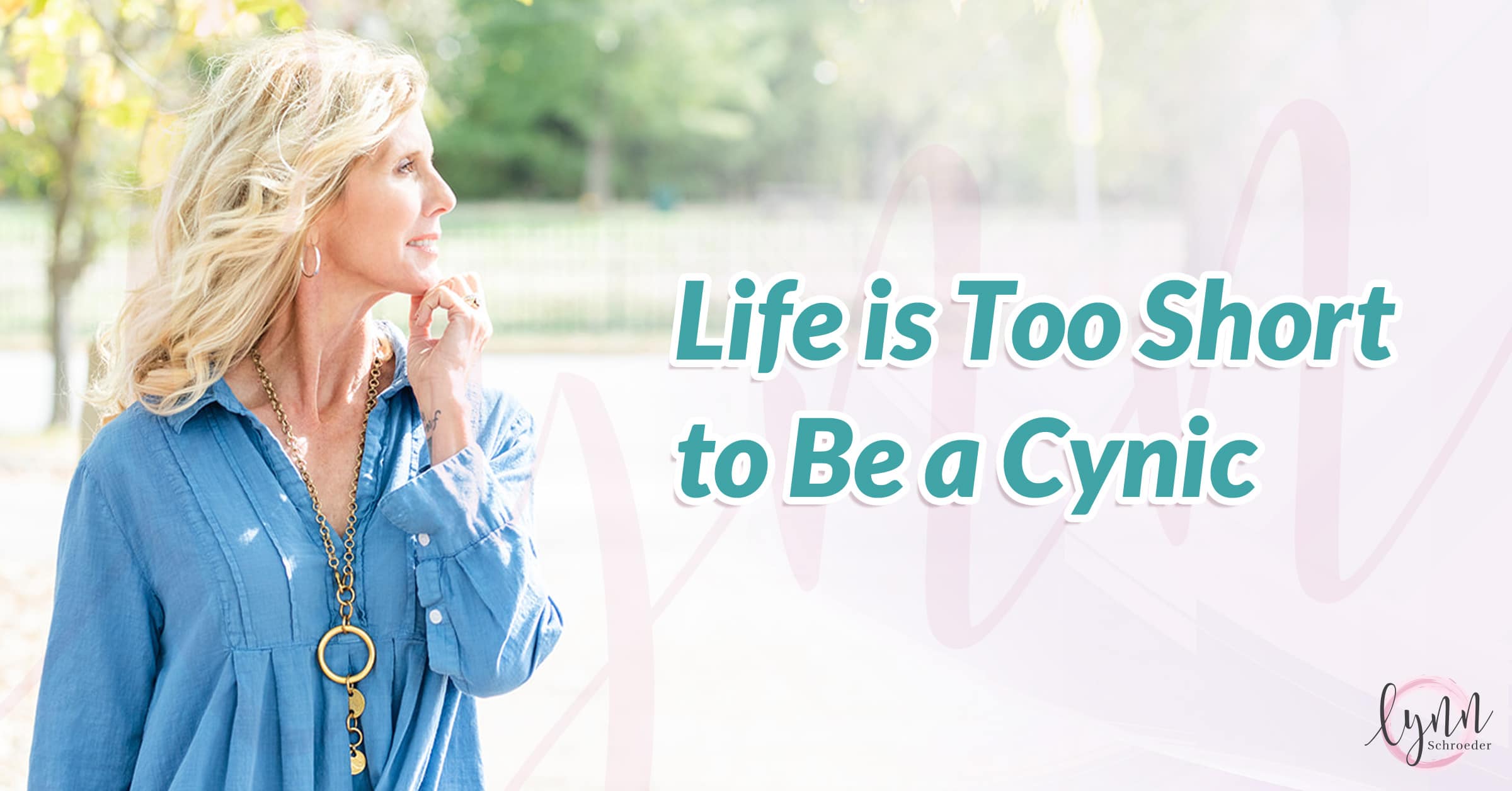 I made the mistake of watching the national news the other day. High crime rates, rising gas prices, climbing interest rates, the war in Ukraine, and Netflix coming down hard on unauthorized shared accounts (gasp!). Geez, how is it that a measly 30 minutes of prime time TV can be filled with 25 minutes of the-world-is-going-to-hell-in-a-handbasket negativity and 5 minutes of uplifting news? It’s enough to make you skeptical of just about everything and everyone and become a major cynic!

Case in point: The day after watching the news, I woke up in a grumpy mood. My coveted quiet time was laced with complaining, I had a woe-is-me attitude, and I was in the mood to pick a fight with anyone who crossed me. I’m pretty sure if you had looked up the word cynic in the dictionary my face would have appeared next to it. I don’t want to be like that. Life is too short to be a cynic.

Full disclosure: There’s no “new news” in many of my blog topics. I tend to write about what’s going on in my world and then share it with you for you to “take it or leave it.” More times than not, I’m writing about a topic that I personally need to take extra care to read. I’m a work-in-progress so the topic of cynicism is one of them. So, moving forward…

All it takes is reading the definition of a cynic to make you realize you don’t want to be one. Here’s how American Heritage Dictionary defines it:

Here’s the deal…a cynic probably hasn’t always believed that people are motivated by selfishness. Neither have they been habitually negative forever. Oftentimes cynicism is a defense mechanism. It’s a means of self-preservation. No one wants to be taken advantage of so being cynical prevents a person from looking foolish or being exploited. Furthermore, at some point in a cynic’s life, they’ve most probably been hurt by someone they love, someone close to them, or someone they’ve trusted. And so, whether consciously or unconsciously, they vow to “never to let that happen again”. 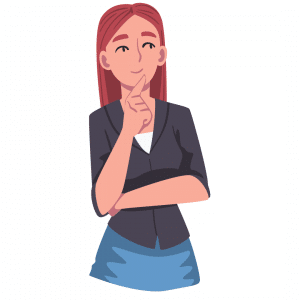 Cynicism can also stem from doubting oneself. When a person feels that they’re not good enough, their self-belief is low, or they think they will disappoint someone they may use cynicism as a tactic to avert the focus off of themself and onto someone else. Instead of dealing with their “stuff”, a cynic has a skewed outlook on others and life in general.

If we’re not careful, cynicism, skepticism, and suspicious attitudes can create a negative filter with which we view things around us. It becomes second nature to distort people by highlighting their flaws. That negative filter causes us to miss out on the joys of life.

In my case, my cynicism showed up because of my mistrust of the media. I feel like I’ve been duped too many times into believing every negative thing I’ve seen on TV or social media is true (heard of any conspiracy theories in the past two years???). It’s not. Oh sure, there’s some bad, but there’s a heck of a lot of good going on around me too. I just need to stop complaining and see them.

The Negatives of Being Negative

Cynical people have their fair share of problems. A few of them are:

Be a Ted Lasso 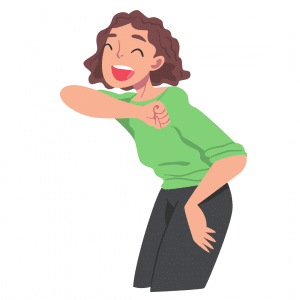 Avoiding cynicism doesn’t mean you have to avoid negative emotions or live in La La Land filled with butterflies, rainbows, and unicorns. It’s not about being phony either. It’s about being like Ted Lasso.

Have you seen the show? Here is my “Cliff’s Notes” version: Ted’s a happy-go-lucky kind of guy who is pretty much always full of joy. His positive attitude usually takes people by surprise and even turns them off but, in the end, it’s infectious. He listens. He’s inquisitive. He doesn’t rush to judgment. He’s not bothered by little things. He has a way of turning conflict into an agreement.

I challenged myself to see: 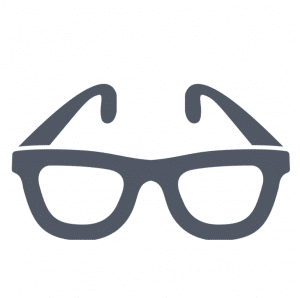 It worked! I saw smiles. I heard thank you’s. I met a person in the gym that walked across the room to introduce themselves to me. I met a woman in the grocery store that thanked me over and over again for helping her unload her cart. I got on social media to find out how a Ukrainian friend here in the US was faring and discovered that hundreds and hundreds of people were donating supplies to her so she could send them back to her homeland. I hung out with teenagers from a youth group and watched them minister to Haitian refugees. My neighbor went out of his way to help me with a few odd jobs I had around our house. I saw an orange-vested woman picking up trash along the beach.

Why is it that I’m surprised at the goodness all around me? Is it because the polarizing beliefs (political and social) in the world have made me jaded? Are conspiracy theories making it hard for me to trust? Is it because I love my comfort and the predictability of my life so much that I’ve become lazy to all the wonder? These are all questions you and I can ask ourselves when we feel like we’re falling off the “positivity wagon”.

Are You a Ted or a Maxine?

How would you rate your cynicism and overall attitude? Do you lean toward being a Ted Lasso or more like a Maxine, the blue-haired crabby lady from the Hallmark greeting cards? Or are you a little in between? Is your attitude an attractor or detractor to people? Are you a sandpaper person who rubs people the wrong way or do people want to be in your company? Are you fair and understanding or judgmental and prejudiced?

Here’s the deal: God invites us on adventures every day. Some of those adventures will cause us to get out of our comfort zone and do hard things. Some are easy and simply call on us to show mercy and kindness to those around us. And some are nothing more than invitations to stop and see the good.

Life is too short to be a cynic. Lean in and look. Search for the good. Oftentimes it’s right in front of us. Can you see it?

Drop me a line and tell me what you thought of this blog. Did you need this reminder as much as I did? I look forward to “hearing” from you.

A Virtual Club Just For Women!

Join me over on Facebook in The Confident Woman Club, where we try to empower women to be the best they can be in their personal life and business.

Everyone Needs to Be Affirmed Every Once In a While!

Don’t forget to download my free confidence affirmations now to help you become the most confident woman in the room.

Get FREE access to the Online Resources of “The Confident Woman Club.”

What’s Wrong With Being Confident? Absolutely Nothing.

It’s time to take control of your thoughts, actions, and life. It’s time to live the life you know you’re meant to live. Want someone to come alongside you to coach you through some of the trials and unexpected events coming your way? I’d love to help!