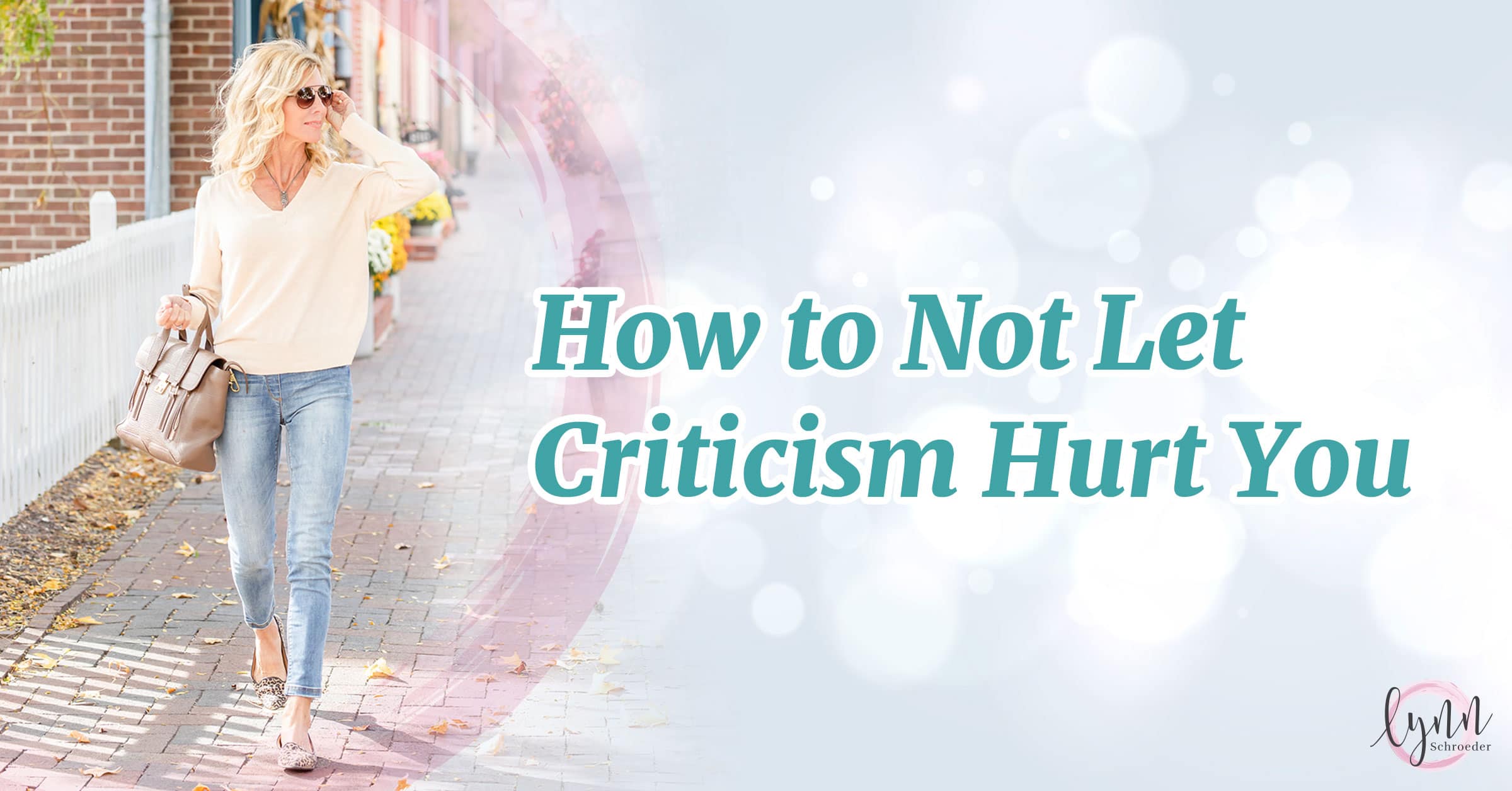 Every once in a while I’ll get a not-so-nice note in my email about a blog I’ve written or a video I’ve posted. I try to have thick skin but, I’m not gonna lie, sometimes reading them really hurts.

Now, I know that some criticism can be good…when it’s given constructively with the intent to teach you something. It’s the destructive criticism that stings and has me shaking my head and wondering why someone would choose to be so mean.

No One Ever Kicks a Dead Dog

While I was licking my wounds after reading one such note, I picked up a Dale Carnegie book lying on my shelf and happened upon a chapter titled “Remember: No One Ever Kicks a Dead Dog.” The chapter tells the story of Richard Hutchins who was inaugurated as the president of Chicago University in 1929. He was only 30 years old. “Criticism came roaring down upon this “boy wonder” like a rockslide. Even the newspapers joined the attack.”

When someone pointed out the criticism to Richard Hutchins’ father, his father replied “Yes, it was severe, but remember that no one ever kicks a dead dog.” In other words, a dead dog won’t respond to a kick; however, the more important a dog is, the more satisfied people get in kicking him.

Reading that was just what I needed to soothe my hurt feelings. I was reminded that when people torment, bully and criticize it’s often because those behaviors give the “kicker” a sick feeling of importance. It can often mean that the “kickee” is doing something important and noteworthy.

When I was younger it was very difficult to maintain my self-esteem when criticism came my way. I felt bruised and misunderstood. Destructive criticism had me doubting my worth and kept me from stepping out of my comfort zone and trying new things.

Over the years, I’ve been able to put criticism in perspective. I’ve learned that I’m not going to be everyone’s cup of tea and that’s okay. Differences among people are part of what makes the world go around. If we were all the same, life would be boring. Yawn.

Let it go. Go ahead. Take a cue from every 4-year-old out there and start humming the tune from the Disney film Frozen. While this catchy and slightly annoying song is more about letting go of the constraints of the past and moving forward with expectation to the future there are some correlations to letting go of critical words or actions too. Here are a few of the words that the beloved blond ice queen belts out:

Let it go, let it go

Turn away and slam the door

What they’re going to say

Elsa was onto something when she sang that song. Slamming the door on destructive criticism and not caring what other people say about us is just what you and I should do!

Here are three analogies that popped into my head as I was preparing to write this. As I’ve “said” before in my blogs, I don’t think in black and white. I think in color, in words, and in connections.

Earlier this week it was a perfect summer day. High in the ’80s. Not a cloud in the sky and no rain in the forecast so I decided to wash my car. As I was digging through my husband’s stash of automobile products I found a box full of goodies: a microfiber wash mitt, an anti-scratch drying aid, a degreaser, a headlight cleaner, a car duster, an extreme tire gel, and leather “honey.” Apparently, I’ve been living with a product junkie and I didn’t even know it.

It was when I happened upon a product called RainX windshield repellent that I knew I had hit the jackpot! I find it so annoying when you wash your car and have it looking super spiffy only to find that as it dries, water droplets have spotted your windshield. But not anymore! This stuff is the bomb! Without getting into the science behind it, this little spray-bottle-of-good-stuff causes water to bead up and run off the glass. No more annoying water spots! Let’s vow to have criticism roll off us like a RainX’d windshield!

If you’ve ever watched a duck, you’ll notice that no matter how often the duck dives under the water, it comes back up looking quite dry. This is because duck feathers are coated in a special oil that repels water. Water droplets quite literally roll off of ducks’ backs.

The phrase “like water off a duck’s back” originated in the 1800s. People often use the phrase to describe insults or other negative actions that others do against them that do not harm them.

It’s been rainy here the last few days. I happen to love summer rains because they are usually refreshing, short lived, and just what the farm fields around me need. Umbrellas make me think about one of my favorite quotes about criticism from Dale Carnegie: Do the very best you can; put up your old umbrella and keep the rain of criticism from running down the back of your neck.

Let’s be like RainX, ducks, and umbrellas and not let any destructive criticism stick to us.

Criticism Comes in All Shapes and Sizes 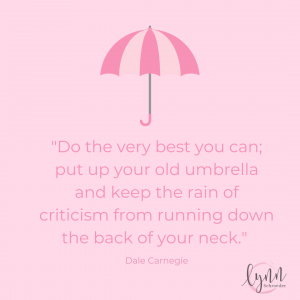 Criticism comes in all shapes and sizes. Some can be small zingers like:

And some can be very hurtful and emotionally scarring like:

No matter the shape or size, don’t let criticism get to you. I recently read about how Eleanor Roosevelt handled the criticism that came with her role as First Lady. She said that she took the advice of an aunt who told her “never be bothered by what people say, as long as you know in your heart that you are right.” Such simple yet powerful advice that we should all take to heart.  Here’s a great rule of thumb: If you’ve done nothing wrong then forget about it.

There is a multitude of reasons why people criticize.  A few of the most common are:

How to React to Criticism 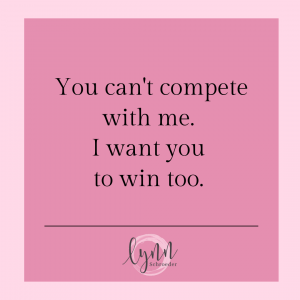 Here are a few ways I’ve learned to deal with criticism:

We’re all on this planet for many reasons. One of those is to bring value to those around us. We do this by using the gifts and talents we’ve been entrusted with. We are masterpieces made by the Master Himself. Each of our journeys will look different from those around us. We need to put our earplugs in and not listen to hurtful words others are saying to us. Hey Friend, do me a favor and believe in yourself. Believe that you’re doing the best that you can. And never let anyone’s critical words steal your joy and sway you from your mission.

I’d love to hear from you. Have you gotten any good takeaways from this blog? What are some ways you combat criticism? Are you harboring any hurt feelings from criticisms that you just can’t let go of? Feel free to reach out to me. I’m a great listener and I’d love to help.

A Virtual Club Just For Women!

Join me over on Facebook in The Confident Woman Club where we try to empower women to be the best they can in their personal life and in business.

Everyone Needs to Be Affirmed Every Once In a While!

Don’t forget to download my free confidence affirmations now to help you become the most confident woman in the room. 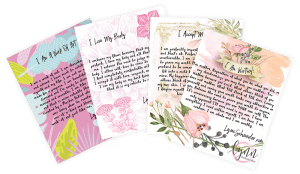 What’s Wrong With Being Confident? Absolutely Nothing.

It’s time to take control of your thoughts, your actions, and your life. It’s time to live the life you know you’re meant to live. Want someone to come alongside you to coach you through some of the trials and unexpected events coming your way? I’d love to help!