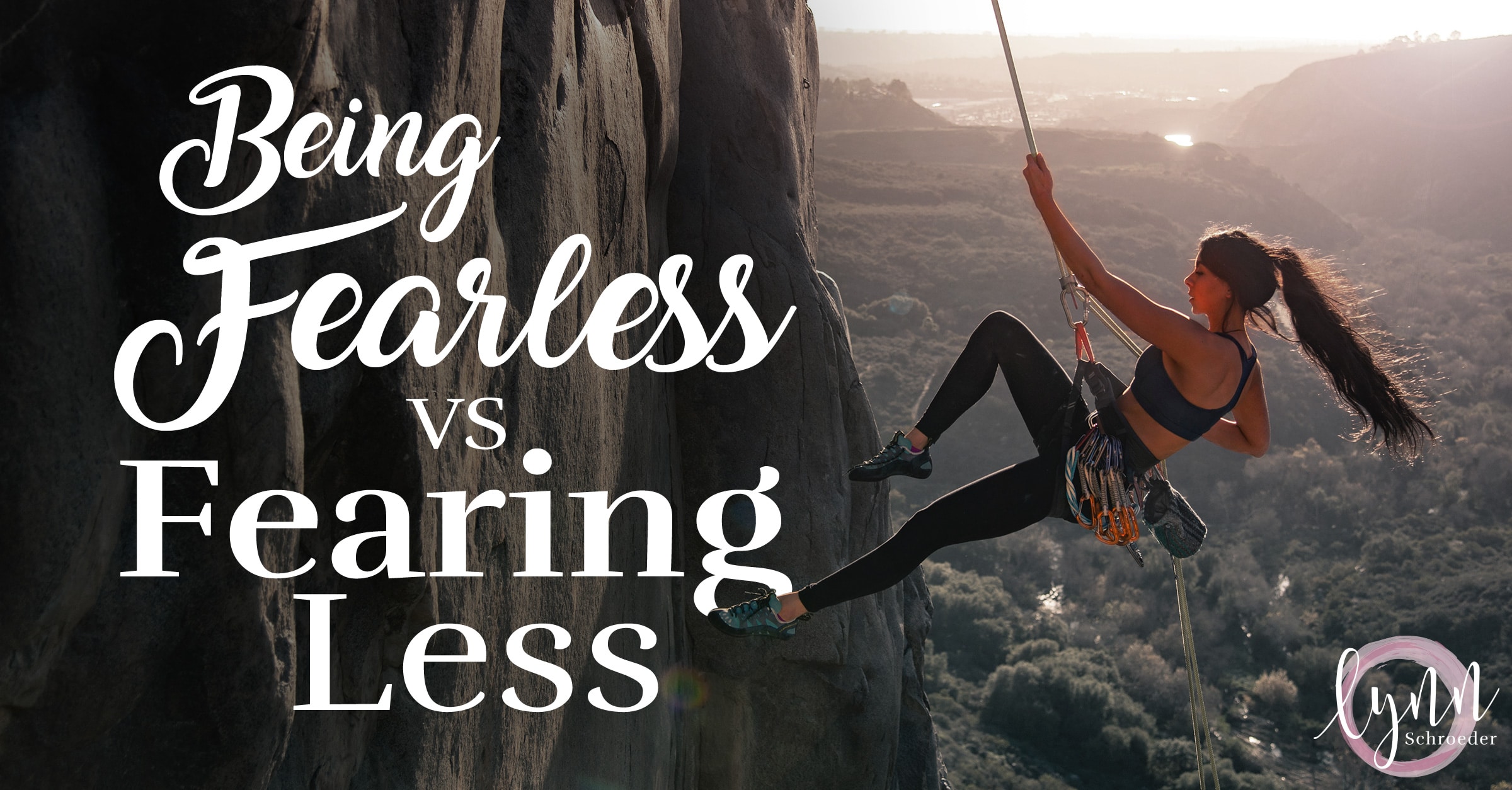 My thoughts today stem from a Facebook post I recently did where I was wearing a t-shirt that said “fearless.” I admit, I’m not fearless. I have plenty of fears. So I wanted to talk to you about two words that are very paradoxical – fearless and brave. I want to say right from the get-go that I believe no one is truly fearless. We can fear less and be brave, but no one is completely without fear.

The thing is, though – fear isn’t our enemy. Think of fear as a really good friend who pushes you and encourages you to do things despite your fear. I can think of several of my friends who challenge me and hold me accountable and call me out on things! Think of fear as that kind of friend – someone who will push you to the next level.

What Being Brave & Courageous Means

Here are some actionable ways in which a person is brave or courageous. To be courageous or brave or to fear less, you have the ability to do things in spite of your fear, and you will step outside of your comfort zone.

I am a creature of habit. I like things the way they always are, but I know that’s not possible. We’re always changing, always growing, and always getting older, and things are bound to change. So I need to get out of my comfort zone from time to time. That’s what a person who fears less will do.

That person will also speak up and have a voice. They don’t stay quiet about things. Little known fact about me – I write letters to the editor. If you’re in St. Louis, check out the Post-Dispatch sometimes, because you’ll often find me writing in about things I’m passionate about. I don’t mind sharing my side.

A brave person will also stand out instead of blend in. They won’t play the chameleon. They’ll shine and be everything they were made to be from the minute He created them.

They will set the bar high for themselves. They won’t settle or coast through life, because you can do so much more when you’re setting the bar higher and when you’re challenging yourself and going against the norm.

A person who is courageous, brave, or fearing less will embrace who they are, and they will also embrace others for who they are. They’re not thinking everyone has to be the same. How boring would that be? They embrace differences, including their own.

I’m so passionate about this last one especially – it really ties into every point I just made. A person who is brave, courageous, and fearing less will opt to live free instead of being bound by debilitating mindsets.

Here’s the deal, all of these things I just mentioned – they are not just emotions. Everyone has emotions. But these are actions. To be brave, to be courageous, to fear less, is an action – it’s not a feeling. It’s something you DO.

Let’s take a minute to think of some examples. Can you think of a time when you were brave? When you were courageous? When you feared the least you could? I’ll give an example of my own.

As you ponder and come up with some times when you were scared and did it anyway, let those examples propel you to continue you to do more and more courageous things. I certainly believe in you!

…Because You Are Brave

The quote I’m going to share with you today is actually a refrigerator post of mine. It’s short and sweet, but it has powerful meaning behind it.

“She did it anyway because she was brave.”

My challenge to you is to think of one thing you want to do, but haven’t pulled the trigger on yet because of fear. It could be anything – going back to school, switching jobs, asking for a raise, speaking up about abuse, walking away from a toxic relationship. Whatever it may be, find the courage to do it anyway and watch what happens. Do it anyway because you are brave!